The lungs are a pair of spongy organs in the chest and are separated from each other by the heart. The lungs are divided into lobes. The right lung has an upper, a middle, and a lower lobe; and the left lung only has upper and lower lobes.
When you breathe in, air flows past your nose and larynx (or voice box) and into the trachea (or windpipe). Just before it reaches the lungs, the trachea divides into two smaller airways called the bronchi, one bronchus for each lung. These airways divide further and further into smaller tubes called bronchioles, which end in the alveoli. The alveoli are microscopic air sacs where oxygen from inhaled air enters the blood; and carbon dioxide leaves the blood and is eventually exhaled.
Each lung is enclosed and protected by the pleura—two layers of thin pleural membrane. The pleural space between these two layers contains a small amount of pleural fluid to lubricate the membranes so they can slide easily over each other when you breathe. Below the lungs is the diaphragm, a thin sheet of muscle that helps you breathe.

Lung Cancer
Cells are the building blocks that make up the tissues and organs. Normally, before a cell dies, it makes a new cell to take its place. However, sometimes a cell becomes abnormal and makes many copies of itself. These copies pile up and form a tumour, a lump of abnormal cells. They mimic healthy cells in the body to evade the body’s natural defences.

Benign tumours, like moles and warts, cannot invade their surrounding tissue or spread to other locations in the body.
Malignant tumours are cancerous. They continue to grow and invade the surrounding tissue. Sometimes cancer cells break away from the tumour and travel to other organs via blood or lymph vessels. This process is called metastasis. Cancer can metastasize to any part of the body; however, cancerous cells from a lung tumour commonly spread to the other lung, lymph nodes, adrenal glands (which are located on top of each kidney), bones, brain, and liver.
Cancers are named after the site in which they first develop—in the case of lung cancer, the primary tumour is in the lung. Even when lung cancer spreads to other parts of the body, the diagnosis remains lung cancer; and the cancer that has spread is called a secondary tumour or metastatic lung cancer. Similarly, if cancer from elsewhere spreads to the lungs, it is not referred to as lung cancer, but as lung metastases from the primary site. 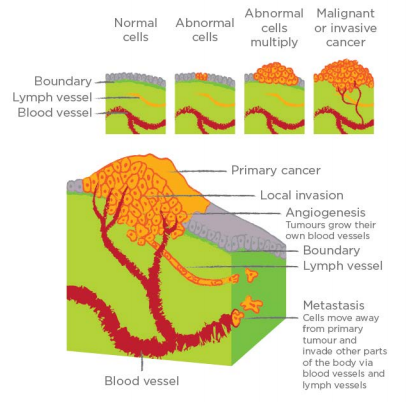 Lymph nodes are small, bean-shaped structures located throughout your body that are part of the lymphatic system. The lymphatic system is a network of organs, vessels, and lymph nodes that helps circulate body fluids, and defends the body against microbes and abnormal cells.
When there is an infection, injury, or cancer in a part of the body, the lymph nodes in that area get bigger. For example, when you have a cold or a sore throat, the lymph nodes in your neck get swollen. If you visited a doctor with these symptoms, they may have felt your neck to check for these enlarged lymph nodes.
Cancer cells from a malignant tumour will sometimes break away and travel through blood or lymph vessels. The cancer cells can lodge themselves in nearby lymph nodes, which normally filter out microbes and abnormal cells. There, they will grow and divide to form a new tumour, which may shed more cancerous cells that can then spread further in the body.
The spread of cancer to the lymph nodes is an important factor in determining the extent or stage of that cancer. The number of affected lymph nodes, the amount of cancer in them, and how far they are from the primary tumour are all considered when your doctor creates your treatment plan.

Small cell lung cancer (SCLC) accounts for about 15% of all lung cancers. These cancers usually develop near the centre of the lungs in the bronchi, and invade nearby tissues and lymph nodes. SCLC is also referred to as oat cell carcinoma because the cancer cells look flat under a microscope.
SCLC behaves quite differently from NSCLC and is more aggressive. The cancer cells divide more rapidly to form large tumours that can spread throughout the body before being detected.

Other types of cancer affecting the lungs

Soft-tissue sarcomas in the lung are rare occurrences. They usually develop in the pleural membranes and grow very slowly.
Carcinoid tumours in the lung are rare, slow-growing tumours that arise from hormone-producing cells in the lining of the bronchi and bronchioles.
Pleural mesothelioma is a rare type of cancer that starts in the pleural membranes that envelope each lung. It is usually caused by exposure to asbestos. Although technically not a type of lung cancer, pleural mesothelioma is treated by the same specialists who treat lung cancer.

For more information on the other types of lung cancer, refer to:

The Demographics of Lung Cancer 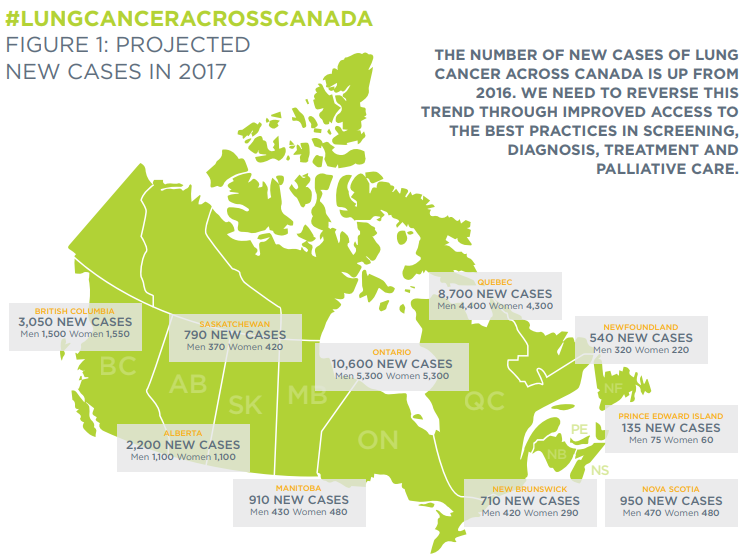