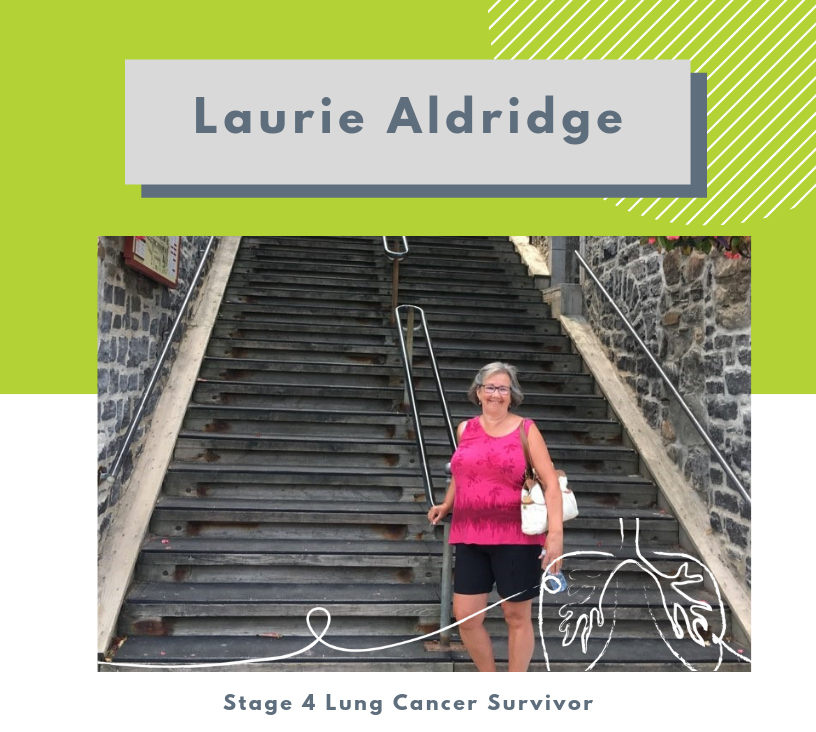 I was diagnosed with non-small cell adenocarcinoma, with ALK and EGFR mutations, which at the time I had no idea what that meant.

It started off with a cough that lasted a long time, so I went to see my doctor. We thought it may have been due to allergies, so I was to try Reactin for two weeks.  I went back to the GP when the symptoms did not improve and we tried another antihistamine for another two weeks, but to no avail. I was then told I needed to see an allergist. The allergist carried out several tests to determine what I might be allergic to, but oddly enough the test results did not reveal anything positive. We tried a breathing test in his office and it was okay, but he thought I should have a more intense one at the hospital. I had the test and still, the results were in and my breathing was fine.

It was then suggested I should have an appointment with an ENT specialist, which meant more waiting time for me.  When I finally got in, he asked me why I was there, so I told him my story. At this point, my coughing was getting worse to the point I was wearing depend pads at work.

The ENT specialist examined me, again to no avail, nothing found. I was then sent to the infectious disease clinic in case I had TB, which was another dead end. Then, I was scheduled for a broncoscopy at the hospital after another physician thought I had complicated pneumonia. I thought, great, we are almost there.  All of this testing was over a period of about 9 or 10 months.  Then one day, my doctor called and asked “when did you have a chest x-ray?” I said, “Well I have never had a chest x-ray before”. I had the x-ray done, she saw something and wanted me to have another one. After reviewing the x-rays with the lung specialist, he advised my doctor to send me to the cancer assessment center.

And that was the start. It was only then I received a possible diagnosis and I had a biopsy to confirm the diagnosis. It was LUNG CANCER.

I had my last treatments in December 2018. I recently had a CT scan and I am still NED (no evidence of disease).

I WAS DIAGNOSED WITH STAGE 4 TERMINAL LUNG CANCER, AND GIVEN 12 TO 18 MONTHS TO LIVE.  SO FAR, SO GOOD.