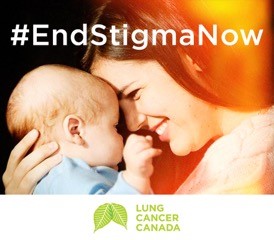 At 26 and 5 months pregnant with her first child, non-smoker Elizabeth Dessureault never thought pregnancy would include a diagnosis of late stage lung cancer and chemotherapy. She was told that she had less than 1 year to live. At that point, the glow and hope of motherhood changed to include fear, a fight for her own life and the heavy stigma weight that lung cancer carries.

Stigma is something that has long been associated with lung cancer.  This is mainly due to the perception that people have brought the disease upon themselves by smoking. Although most patients have quit smoking (and increasingly, some who have never smoked) by the time they are diagnosed with lung cancer, the stigma remains.  Recent research has shown that negative stereotypes surrounding smoking and lung cancer were associated with lower rates of drug treatment.  Although lung cancer has the highest mortality of all cancers in Canada, there is a disproportionate amount of research investment allocated to it compared with other cancers.  There is an obvious need for more investment in lung cancer research that matches the significant burden of this disease.

"I’ve seen first hand the importance of funding for lung cancer research and that it is a women’s cancer too. None of the proceeds from the 'weekends or runs to end women’s cancers' are given to lung cancer despite the fact that it is the most commonly diagnosed cancer in Canada. Not many people realize that more women die from lung cancer each year than all women’s (breast, uterine and ovarian) cancers combined. More young, non-smoking women are being diagnosed all the time. Lung cancer among never-smokers is actually twice as common in women compared to men. I hope to increase lung cancer awareness and hopefully end the 'stigma' associated with it."
- Elizabeth Dessureault

Today, Elizabeth’s tumours are shrinking with the help of a targeted therapy and the inspiration of her healthy, happy baby boy Jack. On February 6th, Elizabeth took her message of hope to the 25th annual Taste of the NFL. She was the second runner-up in Team Draft’s Lung Cancer Survivors Super Bowl Challenge. At the Taste of the NFL, Elizabeth asked attendees for their support with this message:

“No one deserves lung cancer. Give lung cancer the support it needs. ‪#‎EndStigmaNow‬.”